Rachel of the Crispy Cook is hosting this round of Cook the Books, the bi-monthly reading and cooking club (founded by Deb, Rachel and myself). The book we read was Garden Spells by Sarah Addison Allen.

I read and finished Garden Spells in five days. It is a real page-turner and I couldn’t have had better company on the beach: a modern fairytale, well written and full of suspense, with characters one can relate to. The story takes place in North Carolina and involves two sisters, the «good» one Claire, who has embraced her family’s magical abilities with plants, and the «black sheep» Sydney, who left her home town Bascom to live a wild life, but decided to go back and give herself and her daughter a better life. The book does have a tendency towards stereotypes,  and unfortunately the male characters lack the depth and perplexity of the female ones, but at least the people in it are earnest and affable.

I think what really caught my attention in the book was the setting. Sarah Addison Allen was born and raised in North Carolina, so she knows the place well and loves it, despite its eccentricities, and this really comes through in her writing. The houses, the gardens, the magic of the scenery everything is portrayed as truly captivating and I believe it would make a wonderful Hollywood film. I also loved how magic is part of a modern setting and what the plants can do is believable

I am on holidays at the moment which means that there is a kitchen with minimal equipment and the local market only stocks local produce. Although I really wanted to, I could not create a sophisticated dish worthy of Claire’s caliber . I did make however hearty, tasty, spaghetti and meatballs with locally grown tomatoes, packed with Greek herbs and a touch of spice, which was devoured happily by friends and family alike. I guess the extra cinnamon in the sauce did make a difference…

If you like reading and cooking you can join us for the next round of Cook the Books. We will be reading A Homemade Life: Stories and Recipes from my Kitchen Table, by Molly Wizenberg. Round hosted by Deb of Kahakai Kitchen. Entries are due Sept. 26. 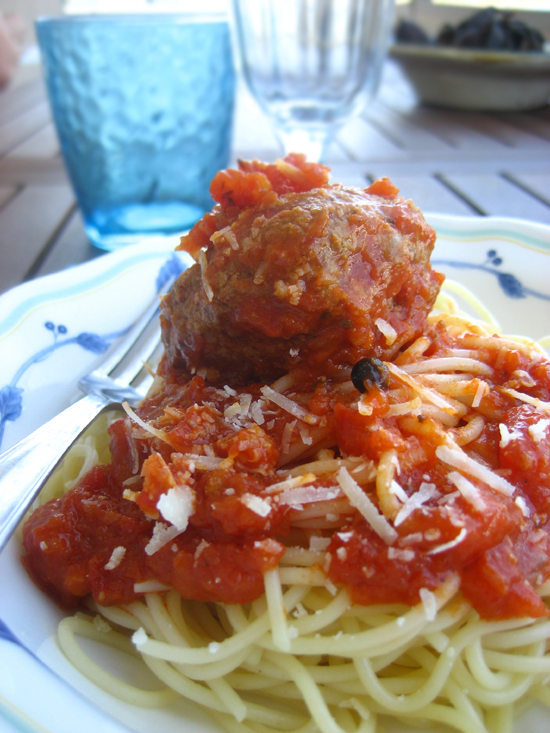 Spaghetti and meatballs: a Greek version

Looking for something?/ Αναζητηση

What do you want to cook?/ Τι θα μαγειρεψετε σημερα;